Save the Gorillas Infographic 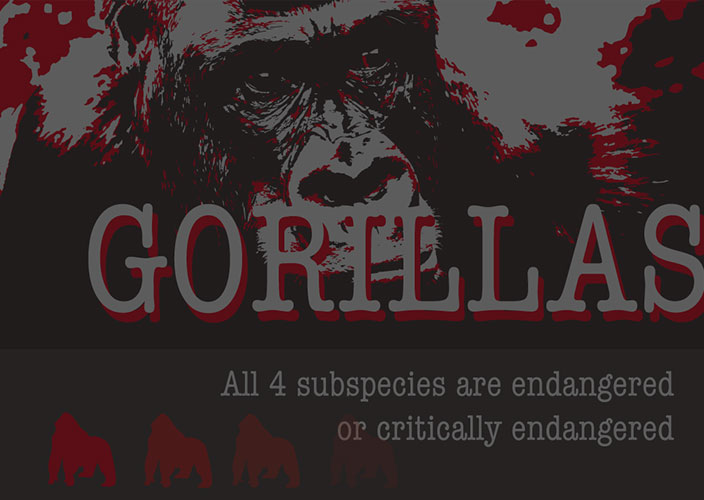 ­Gorillas are A–M–A–Z–I–N–G! It is likely that most people do not realize how similar they actually are to humans — sharing 98.3% DNA. The differences in genes that have been identified relate mostly to skin, hair and fingernail growth. Being so similar genetically, it should come as no surprise that gorillas have impressive abilities to display a wide range of emotions, remember people and situations, communicate via sign and body language, and make and use tools. Gorillas can be total sweethearts; they have a wide range of personalities, similar to humans. While seemingly strong and intimidating, gorillas tend to be very docile and shy in nature unless they feel disturbed or threatened. Living in family groups of 5-10 on average, gorillas are led by a dominant male who holds his position for years.

There are two species of gorillas, eastern and western, living in central Africa. Each of these is further divided into two subspecies — eastern lowland and mountain (eastern) and western lowland and cross river (western). All species of gorillas are classified by the International Union for the Conservation of Nature (IUCN) as either endangered or critically endangered. The cross river gorilla is the most at risk with a population of only 200-300. Numbers for the largest group, the western lowland gorilla, are unknown but estimated to have declined by 60% or more over the last 25 years. In total, experts think there are around 115,000 gorillas left in existence.

Gorillas have no known predators besides humans. The incredible decline in population over the last few decades can be attributed largely to three causes: disease, habitat destruction and poaching.

What can you do to help gorillas?