Palm Oil: How and Why to Avoid It 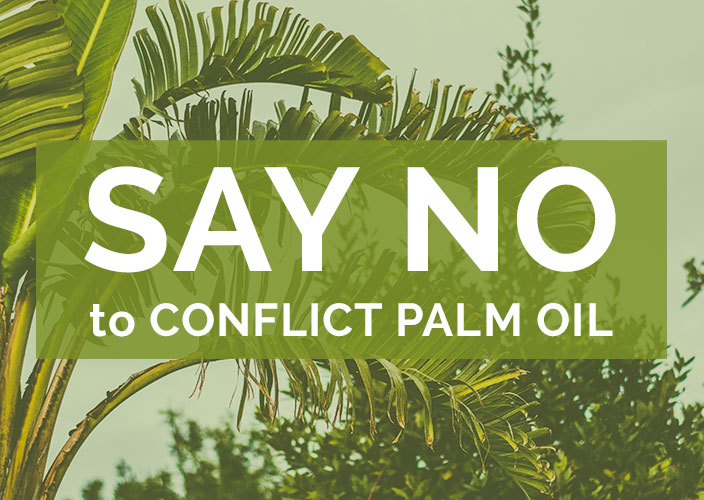 Do you spend time looking at labels on the products you buy? Maybe you recognize palm oil as a common ingredient. Did you know that this popular oil is responsible for severe habitat destruction, climate change, animal cruelty and indigenous rights abuses?

Palm oil is an edible vegetable oil derived from palm fruit, which is found on the African oil palm tree. It’s popularity and demand have been increasing throughout the years with palm oil being found in 40-50% of household products today — everything from food to cosmetics and cleaning products to biofuel. The production of palm oil globally has doubled over the last decade and is expected to double again by 2050 to meet a demand of 240 million tons annually.

While palm oil is harvested throughout Africa, Asia and North America, 85% of the supply worldwide is exported from Indonesia and Malaysia. Unfortunately, palm oil harvesters in these areas tend to disregard sustainable measures. More often than not rainforests are burnt down to make way for palm oil production without any plans for rehabilitation and a complete lack of regard for its current residents. This large-scale deforestation is thought to contribute significantly to climate change, with Indonesia being the third highest greenhouse gas emitter in the world due to the burning of timber and forest undergrowth. According to the World Wildlife Fund (WWF), each hour an area of rainforest the size of 300 football fields is cleared for palm oil production. Absolutely tragic.

Along with the massive deforestation in palm oil producing countries comes an expected decline in key animal species. One third of all mammal species in Indonesia are considered critically endangered. Orangutans are upon the most impacted animals.  Over 90% of their habitat destroyed in the last 20 years. An estimated 1,000-5,000 orangutans are killed each year and without them the ecosystem will suffer. Orangutans are a keystone species, helping to spread and germinate seeds throughout the rainforest as part of their daily activities. Over the last two decades over 50,000 orangutans have been killed. At the current rate, orangutans could become extinct in the wild in the next 5-10 years.

Orangutans aren’t the only animals to suffer. The jungles of Borneo and Sumatra are home to over 300,000 different species that are also being killed and displaced to make way for palm oil production. Some notable species include the Sumatran Tiger, Clouded Leopard, Sumatran Rhinoceros, Borneo Pygmy Elephant, Sun Bear, and the Proboscis Monkey. Wildlife in palm oil producing areas are often found buried alive or killed from machete attacks and guns. Development of the jungle also allows easy access to poachers who capture animals to sell in the exotic animal market or for parts.

Alongside the struggling ecosystem, many human natives are suffering greatly as well. It is not uncommon for a country’s government to sell large plots of land that are owned and inhabited by indigenous people for their own financial gain. Corporations that purchase the land force the natives off and destroy the surrounding forests that they have come to rely on for food, resources and safety. In many instances this leaves individuals with no option except to work for the newly developed palm oil plantation. These plantations are often subject to poor working conditions and workers are barely paid enough to survive. Many laborers found at plantations — including children — have been forced into the industry through debt bondages or human trafficking and often receive no pay.

Those able to keep off the plantation are not safe either. Massive burns throughout countries like Indonesia to clear room for plantations covers the land in thick smoke, killing tens of thousands of people annually as a result of respiratory illness.

If you still need more reasons as to why you should avoid palm oil, look at the health risks. Palm oil is high in saturated fats compared to alternative vegetable oils, very heavily refined therefore depleted of vitamins and nutrients, and has elements that are dangerous to the human body when oxidized — which many versions of the oil are.

What Can You Do to Stop Conflict Palm Oil?

Unfortunately the problems within the palm oil industry aren’t going to go away until the demand slows down, but there are some things you can do to help!

Stop supporting the industry! There are a number of household products that contain conflict palm oil. Some common offenders include: Lipstick, instant noodles, shampoo, ice cream, detergent, margarine, chocolate, cookies, soap and packaged bread. These tips will help you identify products that contain palm oil and avoid them:

Speak out! There are a number of petitions targeted at large companies and others using palm oil that you can get behind. Here are a few things you can speak out about:

Government Biofuel: Indonesia’s President is planning a $1.35 billion biofuel subsidy that would dramatically speed up deforestation. Help get this legislation scrapped!

Sign Your School (or Self) Up! Sign up to gain access to DeforestACTION’s network of thousands of students and teachers worldwide who are working towards combating deforestation.

As we head into the holiday season be mindful of the products you are purchasing and brands you are supporting. Make sure you check labels and avoid products that contain conflict palm oil.

All Cause You Care products are sustainably made in the U.S. using eco-friendly inks and minimal packaging. Shop our site and help save animals! .

Spread the word about palm oil and share the infographic below: